One of the major objectives of the IODE Programme is to assist Member States to acquire the necessary capacity to manage marine data and information and become partners in the IODE network. It is only when IOC member states have acquired this expertise at the national level that they can become an active partner in IODE and thus share their data and information with the other members of the "IODE family". The training does not only teach the principles of data and information but also promotes the use of "standards" amongst all IODE centres and thus achieve interoperability between these centres.

Capacity building has been a cornerstone of the IODE (International Oceanographic Data and Information Exchange) Programme of the Intergovernmental Oceanographic Commission of UNESCO (IOC) since the programme’s inception in 1961. Between 1961 and 1997 the IODE capacity building programme was based upon four types of activities: (i) expert missions to Member States to advise on the establishment of national oceanographic data centres; (ii) organization of group training courses; (iii) support for internships in established national oceanographic data centres; and (iv) provision of equipment. This strategy was used for nearly four decades (1961-1997) and resulted in the successful establishment and operation of over 60 national oceanographic data (and information) centres in as many countries around the world. However, the programme had several major flaws: (i) the expert missions identified the capacity building requirements but IOC did not have the necessary financial resources to assist the visited member states in a substantial and sustainable way; (ii) training courses were not followed up by interaction with the students, nor was any support provided (e.g. equipment, feedback) to ensure that the acquired knowledge could be applied. In the case of developing countries, the impact of IODE capacity building efforts was therefore often unsatisfactory and did not have long-term effects. An additional flaw was that no standard training curriculum on data and information management existed

Since the late 1990s IODE designed a new way to develop capacity in (developing) member states. This new "strategy" is based upon these four elements:

This innovative strategic approach was called the ODIN (Ocean Data and Information Network) strategy and was used as from 1997.

One of the core success elements of the ODIN strategy is the two-tier approach in terms of product and service development: ODIN projects deliver regional products and services (eg regional data bases and information bases) but each partner country also receives support to develop products and services that are specific to national or even local priorities and needs. This approach has led to a wealth of products developed at the national level going from research oriented taxonomic databases to “what do I find on the beach” brochures aimed at primary school children. This approach was found to maximize involvement and buy-in from the partner institutions and partner experts thereby maximizing the potential for long-term sustainability of the established infrastructure and expertise.

The IODE capacity building activities in Africa were started in 1989 with the Regional Cooperation in Scientific Information Exchange (RECOSCIX-WIO) project and continued until today with the completion of ODINAFRICA-III. This evolution is illustrated in Figure 2. 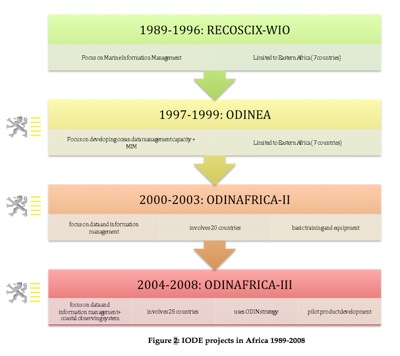 RECOSCIX-WIO was started by IOC after a fact-finding mission undertaken in 1987, funded by UNESCO. The objective of this mission was to investigate the feasibility of establishing a regional network (with point-to-point electronic links using modems) for the exchange and sharing of scientific literature. The study concluded that such a network was indeed feasible and this led to the RECOSCIX-WIO project in 1989.

Between 1989 and 1996 RECOSCIX-WIO created an effective network of marine libraries in Africa. The network not only created institutional linkages but also human networks which led the Eastern African region to request support from IOC/UNESCO to develop a network that could also exchange oceanographic data.

The start of the cooperation between the Government of Flanders and UNESCO/IOC in 1997 enabled IOC/UNESCO through IODE to respond to the request and this was the start of the Ocean Data and Information Network for Eastern Africa (ODINEA).

ODINEA focused on providing basic infrastructure in 7 African countries (Kenya, Madagascar, Mauritius, Mozambique, Seychelles, South Africa, Tanzania). An important element in the project was support to access the Internet which was crucial to expose the participating institutions to the rapidly expanding Internet through which data could be obtained and through which fast communication with colleagues became possible. During the final ODINEA workshop the project participants stated:

“The capacity of the data centres to collect, process, analyse, store and interpret

various categories of data sets was strengthened through the provision of up-to date computer equipment and peripherals, software as well as training for data centre personnel.

The centres have used this capacity to develop national meta databases, thereby

enabling users to know what data sets are available and how to access them. The development of national data archives has contributed to the preservation of data sets which were in danger of being lost. Through linkages established within the framework of the project, the centres have been able to access data sets from regional and international data centres.”

The main objectives of ODINAFRICA-II were:

Support from the project enabled the NODCs in the participating Member States to cater for a wide range of activities such as operational expenses (including internet connection), development of meta databases and data archives, and development of data and information products. The ODINAFRICA-II activities in each country were publicized through websites, brochures, information sheets, data summaries, calendars, meetings/seminars, lectures to educational institutions, and meetings with key government officials.

In order to improve networking between the ODINAFRICA institutions, databases developed at national level (such as directories of experts and institutions, meta databases, library catalogues etc) were now collected, quality controlled and formatted for access via the Internet in order to encourage broader usage.

One of the conclusions of ODINAFRICA-II was that data management capacity had now been created in all participating countries but that more emphasis should be put on stimulating data collection through the establishment of observing systems.

The third phase, ODINAFRICA-III started in 2004 (actually the project started in 2005) as a large scale project funded under the UNESCO-Flanders Trust Fund for Science (FUST). 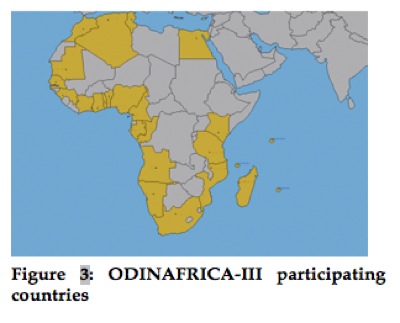 ODINAFRICA-III aimed to construct a Pan-African coastal observing system including a core network of tide gauges, but also making other in situ measurements where appropriate. The core network was to capitalise on existing systems like the global network of tide gauges established by IOC’s GLOSS programme. The data stream from the observing network would be fed into the network of data centres established through the ODINAFRICA Project, and would provide the basis for development of a wide variety of products and services, so as to ensure the widest possible use for the data centres created during the ODINAFRICA Project. The observing network would make a fundamental contribution to in situ ocean observing system of Regional Ocean Observing and Forecasting System for Africa (ROOFS AFRICA) and to global networks of ocean-related data and information. ROOFS-AFRICA is part of the Global Ocean Observing System for Africa (GOOS AFRICA) and has been accepted as a key project of NEPAD.

One of the core methodologies of ODINAFRICA-III was the concept of national vs. regional work plans: although the project had a number of regional objectives and expected deliverables it also included financial “envelopes” for each partner institution that could be used to address specific national needs for data or information products. This approach resulted in a wide and rich variety of data and information products.

[1] Note: ODINEA and a pilot project in Western Africa called RECOSCIX-CEA were considered as ODINAFRICA-I